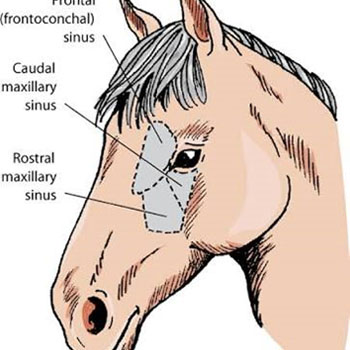 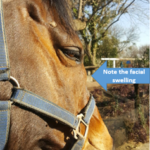 This gelding, who loves his job as a general riding horse, presented with respiratory noise in work as well as facial swelling.

Radiographs of the skull were performed to determine the cause of these clinical signs and it was found that he had developed a cyst in his caudal maxillary sinus that obstructed the drainage of the interrelated paranasal sinuses (air-filled spaces located within the bones of the skull). 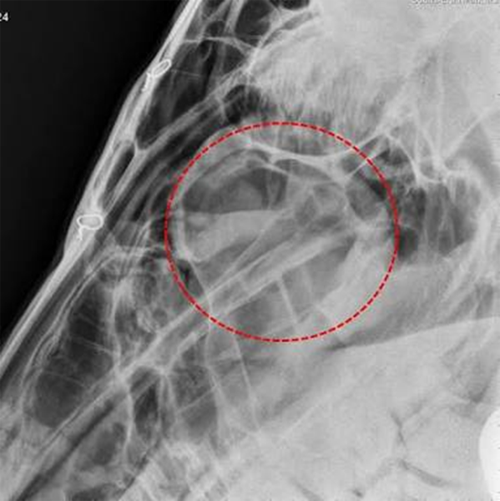 The lowdown on maxillary sinus cysts

The most common clinical signs of a maxillary sinus cyst are nasal airway obstruction, facial swelling, and nasal discharge. They can often make a respiratory noise when exercising due to the narrowing of the nasal passage. Further diagnostics, such as endoscopy of the upper airways can be performed which would show the narrowing of the nasal passages. These horses generally have radiographic changes as well, with acute sinusitis of the paranasal sinuses and occasional remodelling of the bone.

It is also thought that these cysts may develop after bleeding (in the upper airways) occurs. Horses may also suffer from primary sinusitis while secondary sinusitis may develop from something as simple as a tooth root abscess. More sinister growths in the paranasal sinuses may develop and the prognosis for recovery will depend on the lesion. Hence, an accurate diagnosis is essential! 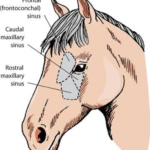 Horses have complex, air filled paranasal sinus cavities with seven paired paranasal sinuses. In younger horses, the maxillary sinus accommodates the “reserve” crowns of the last four cheek teeth and as the horse ages, so the sinus becomes progressively larger. Five of these sinus cavities drain through a communal opening into the nasal cavity.

Treatment usually involves a surgical procedure- either a large bone flap, or a round trephination hole made into the sinus.

Fortunately for this gelding, we were able to perform a sinus trephination into the frontal sinus under sedation with local analgesia. This involved drilling a hole into the sinus using relatively simple surgical tools. This procedure is very well tolerated by the horse and doesn’t require them to be put under general anaesthetic.

Trephination is an invaluable diagnostic aid and in this case, was also curative. A tissue sample of the cystic structure was taken and submitted for histopathology (microscopic examination of the tissue) to determine what it was and a sample for bacteriology was also collected- the reason being- to determine that if the horse required antibiotics, which would be most suitable.

The cyst was lanced to facilitate drainage. The sinus cavity was flushed for a couple of days to remove all the residual mucoid (mucus) material and an endoscopy of the paranasal sinuses revealed no other abnormalities.

I’ve attached the video for you to add here

Note the mucus type material that accumulated around the cyst in the paranasal sinuses.

He made an uneventful recovery and has resumed his leisurely life as a riding horse in Kyalami.

We use cookies on our website to give you the most relevant experience by remembering your preferences and repeat visits. By clicking “Accept All”, you consent to the use of ALL the cookies. However, you may visit "Cookie Settings" to provide a controlled consent.
Cookie SettingsAccept All
Manage consent

This website uses cookies to improve your experience while you navigate through the website. Out of these, the cookies that are categorized as necessary are stored on your browser as they are essential for the working of basic functionalities of the website. We also use third-party cookies that help us analyze and understand how you use this website. These cookies will be stored in your browser only with your consent. You also have the option to opt-out of these cookies. But opting out of some of these cookies may affect your browsing experience.
Necessary Always Enabled
Necessary cookies are absolutely essential for the website to function properly. These cookies ensure basic functionalities and security features of the website, anonymously.
Functional
Functional cookies help to perform certain functionalities like sharing the content of the website on social media platforms, collect feedbacks, and other third-party features.
Performance
Performance cookies are used to understand and analyze the key performance indexes of the website which helps in delivering a better user experience for the visitors.
Analytics
Analytical cookies are used to understand how visitors interact with the website. These cookies help provide information on metrics the number of visitors, bounce rate, traffic source, etc.
Advertisement
Advertisement cookies are used to provide visitors with relevant ads and marketing campaigns. These cookies track visitors across websites and collect information to provide customized ads.
Others
Other uncategorized cookies are those that are being analyzed and have not been classified into a category as yet.
SAVE & ACCEPT